The Math RPG is still on the backburner and will be until project Wonderchicken is completed. Lately I’ve been making a conscious effort to focus on one side project at a time instead of juggling 3-4. Mentally it is challenging to handle the context switches and build any sort of momentum. But back to the topic at hand. A few months ago, I was exploring the Khan Academy iPad app and ran into a trailer for all the cool projects that students created on their CS platform. Gameplay of what looked to be Super Mario Bros. 3 was shown, so I looked up the project and noticed that the author had found a workaround that let him load external javascript and other assets, such as images and even audio at one point. That was impressive.

A bit of background. The Khan Academy CS platform does not allow the use of external assets, most notably images. And of course, this has led to many students finding clever workarounds. One obvious solution is to encode the RGB values into a big array and then redraw the image. The problem with this is that the amount of data required to encode the image becomes very large and can slow down or crash the browser. This restriction is unintentionally a good feature, since it brings out the, I guess, “hacker spirit”, which is an important trait to being a programmer.

The restrictions on external image usage has always been roadblock for porting the Math RPG engine to the Khan Academy CS platform. The other issues being laziness and lack of time.

But so after exploring the code Super Mario Bros. 3 code, I naturally tried to reverse engineer the workaround. This was a bit tricky since the code was obfuscated in a bunch of nested anonymous functions, of which it was not clear whether they were required or not. Eventually I was able to simplify the workaround to something understandable.

As an aside, I privately reported this workaround to a member of the Khan Academy CS platform team. It is surprisingly difficult to report an issue in private. There looks to be a way for reporting bugs and comments in a public forum, but no private messaging. I ended up going to the team member’s personal blog. I’m only writing about this now that the workaround has been blocked using a whitelist against urls outside the Khan Academy sandbox domain.

Here is a screenshot of my spritesheet loaded into the Khan Academy CS platform: 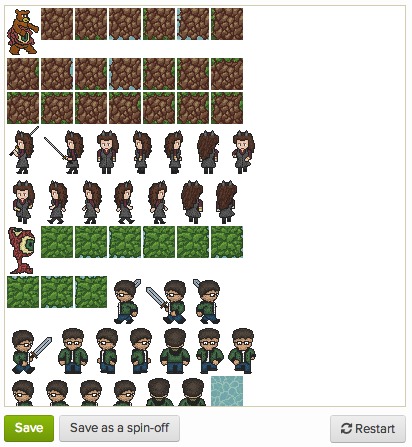 There are three tricks required for this to work:

The external resources must be loaded after a event, such as a mouse press. This is because code is probably validated and executed to check for restricted features. However code executed after events seem to be out of scope.

I’m not sure how it works, but the following code returns a global “this”

The final trick for loading images is adding the “crossOrigin=anonymous” attribute to the image element.