This time, instead of using Firebase, I plan to implement the multiplayer mechanics using WebRTC. In addition, I am planning to integrate audio/video player avatars which I will discuss more in my next post.

This post will cover how I integrated phaser 3 and WebRTC to create a multiplayer game (technically just a demo for now).

Here is a link to the non-multiplayer demo I created to refresh my memory on using Phaser 3. 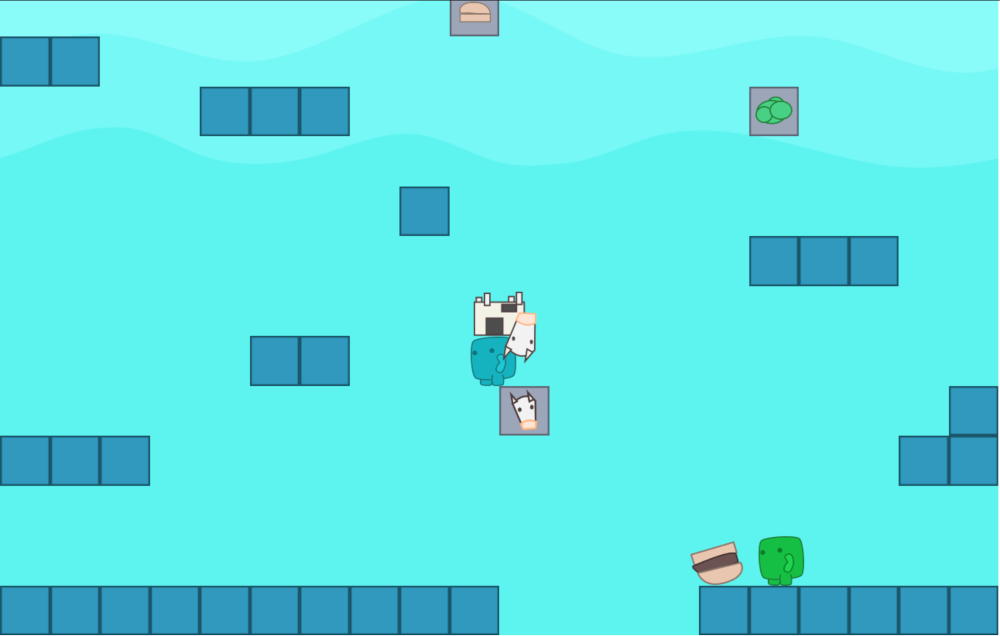 When researching how to create multiplayer networked games on Phaser 3, I came across a library called Geckos.io. It was almost exactly what I was looking for (does not support video/audio).

Geckos.io is a WebRTC backend server that handles data channel connections between multiple clients. It can be thought as something like socket.io, but instead of using WebSockets over TCP, it uses WebRTC over UDP.

UDP is useful for multiplayer games since we need low latency. Otherwise a fast paced game with a lot of players could end up being too choppy to play. UDP has better performance over TCP since the latter needs to ensure all packets arrive whereas UDP is OK with dropped packets.

Geckos.io can be combined with Phaser 3 in headless mode. Phaser 3 will run in headless mode on the backend node server. This approach centralizes the game logic on the server to prevent cheating.

The clients will also run Phaser 3. But the code in the browser will only have two main responsibilities:

Geckos.io will be responsible for sending inputs to the server and returning the current game state when it is updated.

For Too Many Cooks, I am hoping the game will be simple enough that a basic client/server approach works. There are optimizations, such as client-side prediction and lag compensation which are described in this article called Latency Compensating Methods in Client/Server In-game Protocol Design and Optimization by an SDE at Valve in 2001.

The backend server in Too Many Cooks uses phaser, geckos.io, and express.

Express has the following responsibilities:

The last responsibility is interesting since most tutorials I have seen for WebRTC, suggest using WebSockets for signaling, so it is interesting that geckos.io does this using HTTP requests only.

I believe the reason for this is for latency reasons. Having both a WebRTC and WebSocket connection is a bit unnecessary, especially when the WebSockets would only be used for the initial signaling steps.

In order to make this approach work, it seems like it is required that the backend server send the initial offer. Technically, the client will need to send a request to the backend server which will then respond with an offer. The client can then send their answer by posting another HTTP request. The ice candidate exchanges will also work in a similar fashion where client sends HTTP requests.

Adding geckos.io to the backend to integrate with phaser and express is straightforward. There is a nice multiplayer game demo that that the creator of geckos.io created which I was able to modify to work with Too Many Cooks.

In game.js, we can extend Phaser.Game to include an option to pass in an HTTP server.

Then when we initialize the first Scene in phaser we can create an instance of geckos.io and set it up to use our HTTP server.

We can now use geckos.io to send and receive messages to connected clients.

When a client connects to the server, geckos.io will trigger an onConnection event. This event also sets up other events, such as onDisconnect, getID, playerMove, and addPlayer.

When a client joins the game, they will emit a getID event. This will be followed by an addPlayer event.

The playerMove listens for player input.

The onDisconnect event handles the scenario when a player loses its WebRTC connection. In this case, the server will emit a removePlayer event to notify clients that player is no longer in the game.

When sending back the game state, we could use JSON, which is very readable, but to minimize the data that we are sending, we can use a custom data format.

The prepareToSync function takes an entity and creates a comma separated string of the state necessary to render a sprite on the client.

The properties are as follows:

Integrating the geckos.io client on the frontend is similar to the backend approach.

On the client we listen for the following events:

On the client we send the following events:

In order to update the game state we need to process the comma separated string of entity properties.

We parse the the game state data in the parsedUpdates function. Every time we change the format we need to update this function. For example if we add a new parameter or swap the order.

The algorithm to process the string is follows:

Similar to game state updates, we want to minimize the data we send to and from the server. So instead of JSON, we once again rely on a custom data format which is more compact.

In this case we send a number that encodes a player’s inputs. Examples:

This encoding is basically how Linux encodes file permissions. Examples: